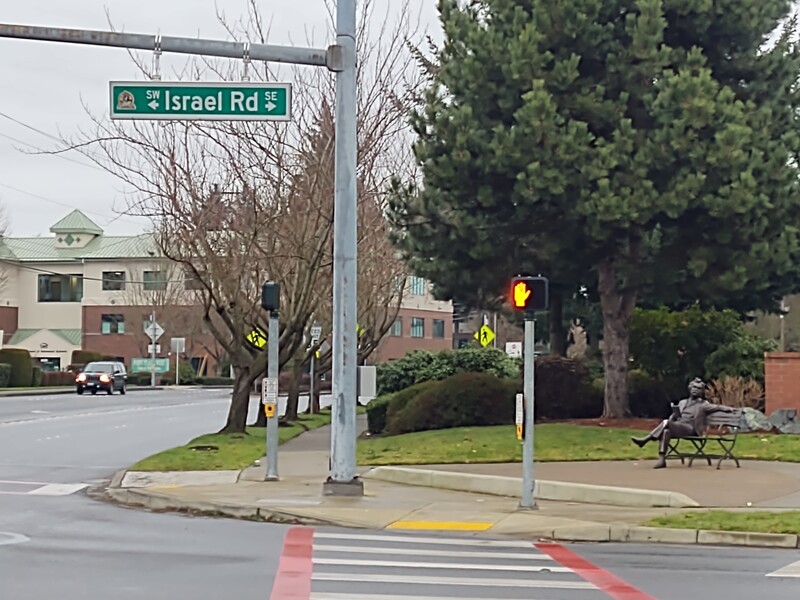 The corner of Israel Road and Capitol Boulevard, home to the Washington State Library. Legacy Washington

The following is an example of an essay entry by Legacy Washington's Aaron Peplowski:

The Washington State Library, in addition to books and other media available to the public, contains a number of departments that are a part of the Office of the Secretary of State. This includes Legacy Washington, where I work with a small, but talented team devoted to telling the stories of our home state and its extraordinary citizens. The library is located at the intersection of Capitol Boulevard and Israel Road, which should be familiar to locals because of the Mark Twain statue, often dressed in a manner reflecting holidays and other festive occurrences, sitting on the corner.

I was never too curious about the name of Capitol Boulevard. If you drive north, you’ll eventually make it to the State Capitol Building. The origin behind the name of Israel Road, however, was not as easy to assume. It could have been named for the country, naturally, but I had also seen Israel as both a given name and a surname. So, I started locally to see what I could find. 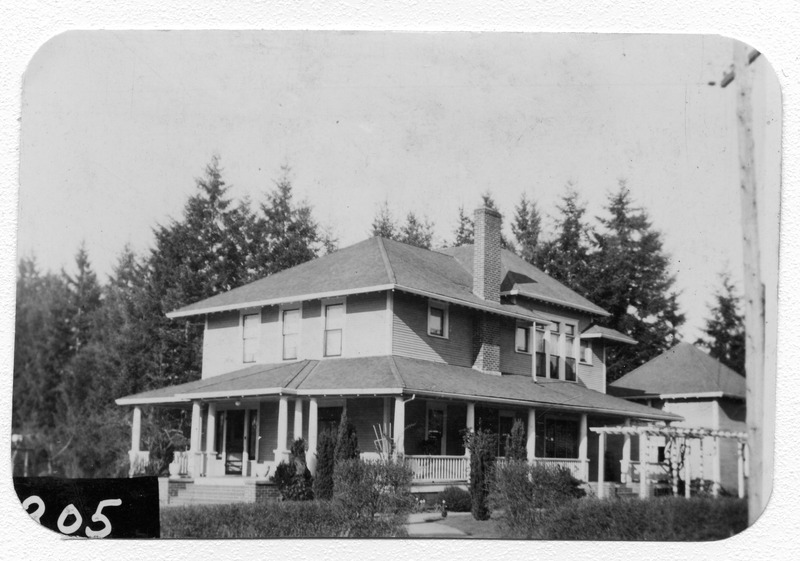 George C. Israel's house in Olympia was built in 1904. The house is shown here in 1936. Washington State Archives

It did not take too long to find out that the Israel family had quite an impact in the Olympia area. Some key sources used in my research were local institutions Olympia Tumwater Foundation and Olympia Historical Society, as well as Ancestry.com and Newspapers.com. The Olympia Tumwater Foundation preserves the legacy of Olympia Brewing Company’s Schmidt family, their house, and Brewery Park here in Tumwater. Through the Schmidt House Facebook page, Public History Manager Don Trosper (another notable Tumwater surname) shares Tumwater facts, including the origins of street names. The Olympia Historical Society maintains a website highlighting people and places from our state capital’s history. This includes information on George C. Israel and his house, which is recognized as a historic property. 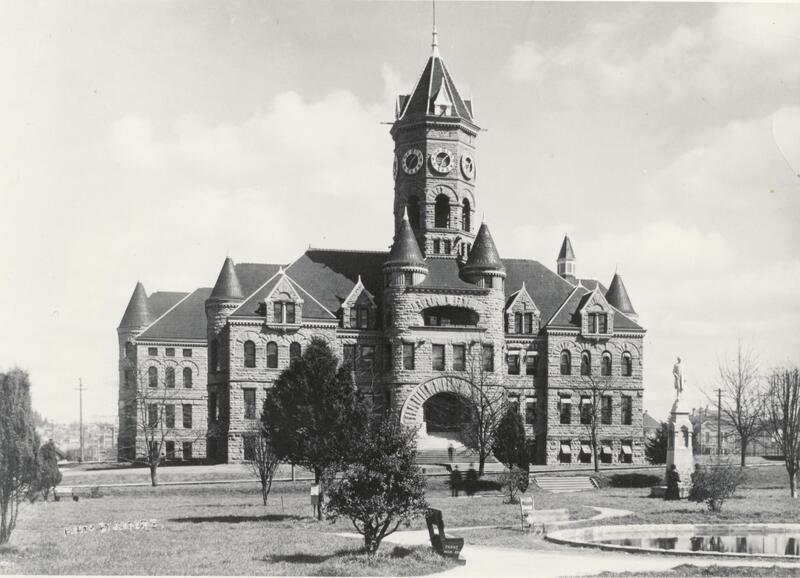 William C. Israel was known for his involvement in creating the Thurston County Courthouse, known now as the Old State Capitol Building and home to the Office of the Superintendent of Public Instruction. Washington State Archives

The street is not named for George, though he is central to its naming. The street is named after a William Israel, and there are possibly three men of that name in his family. We can eliminate the brother that lived and died in the 1860s in California, who appears on some Ancestry.com trees but not others and has no sources listed on those entries. George appears to have had a son named Willie, according to the Olympia Tumwater Foundation, Olympia Historical Society, and the Washington State Historical Society, who keep an image of his fifth grade class in their collection. The Olympia Tumwater Foundation attributed the road’s name to this William, but likely conflated the story with the eldest William, George’s father. William C. Israel was an early Thurston County Commissioner who built what is now known as the Old State Capitol Building. Furthermore, he owned a parcel of land on what is now Israel Road. We can reasonably assume that this William puts the Israel in Israel Road. 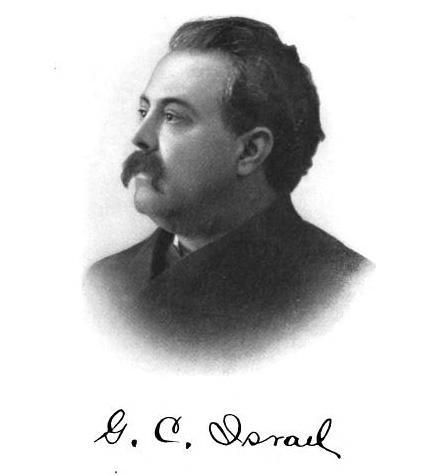 Here’s where things got interesting. George is well-regarded in history books, referred to as “a man of independent and resolute character” and “one of the best known criminal lawyers of Washington” who presided over “30 murder cases.” What none of these sources mention is another murder case in Baker City, Oregon, where George C. Israel, Esq. was the defendant. After leaving the Olympia area to practice law in Baker City, Israel came into conflict with a retired shop owner named E.D. Cohen, a German Jew who immigrated to the United States in 1845. On October 29, 1886, an argument escalated into murder, and Israel pleaded self-defense in his January 1887 trial. To the dismay of many locals, Israel was acquitted. Numerous factors fueled the scandalous event, from political squabbles to bribery to anti-Semitism. No one seems to know for certain why Israel’s defense worked, but we know that he moved back to this area and enjoyed a legacy free from the taint of what he did that autumn night. 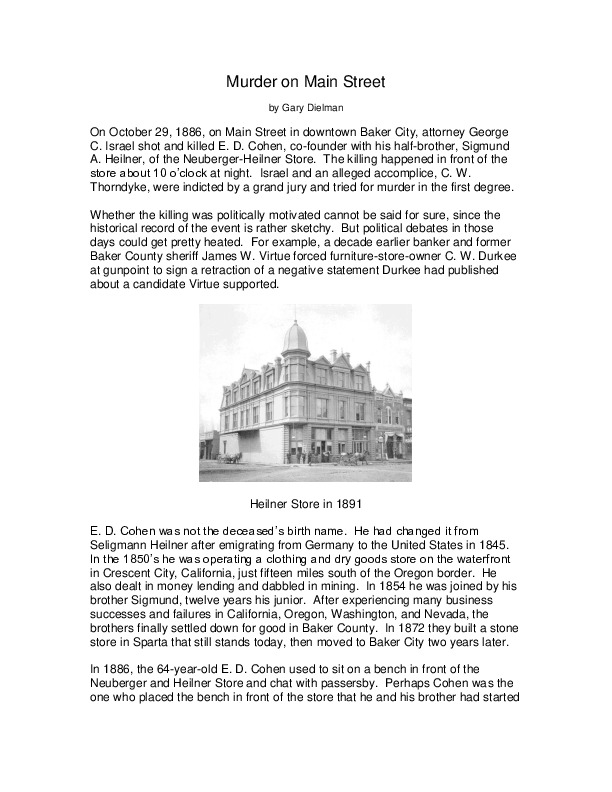