How Do Nations Resolve Disputes without Violence?

How Do Nations Resolve Disputes without Violence?

In this focused inquiry, students will learn about the Pig War as a topic to investigate the question: How do nations resolve disputes without violence? They will also consider: How and why did the Pig War happen? Students will engage in deep reading, develop information summaries, conduct independent research, and participate in small and large group discussion. Students will write an argument with a well-formed claim, clear evidence, and reason.

1. Students will be able to read primary and secondary sources, and gather information that helps them answer compelling and supporting questions.

2. Students will explain the chronology of events that resulted in the Pig War in a one-page document.

3. Students will develop a claim with evidence and reasoning to answer the compelling question.

• H2.6-8.2: Explain and analyze how individuals and movements have shaped Washington State history since statehood.

• CCSS.ELA-LITERACY.RH.6-8.7: Integrate visual information (e.g., in charts, graphs, photographs, videos, or maps) with other information in print and digital texts.

How do nations resolve disputes without violence?

What causal factors created The Pig War? What were the events and how did no violence occur?

Show students the map of the Pacific Northwest and the corresponding questions. In partners or independently, invite them to read it carefully and to answer the questions based on the map.

Show students the sign marking the English Camp on San Juan Island and the corresponding questions. In partners or independently, invite them to read it carefully and to answer the questions based on the sign.

Note: This step has two parts. Be sure to watch the video before you show it to students and be ready to pause it at the correct time noted on the reflection sheet. You also may need to pause the video every so often for student discussion and to record their answers.

Invite students to read the newspaper articles (edited for length and readability). Do these sources agree with the events as you’ve learned them so far in the lesson? Students should annotate the texts as they read and list at least two corroborating facts from each article.

Now that students have learned many facts about the Pig War, including the sequence of events, invite them to complete a “one pager” that shows the following:

Have students use the information they got from the background texts and the primary source texts to answer the compelling question: How do nations resolve disputes without violence? Student responses should include a clear claim, specific evidence, and a well-thought-out reason.

Invite students to research a conflict and provide a recommendation as to how it might be resolved without violence. Students will use the information learned in this inquiry to guide their thinking.
WSL_How do nations resolve disputes without violence.docx 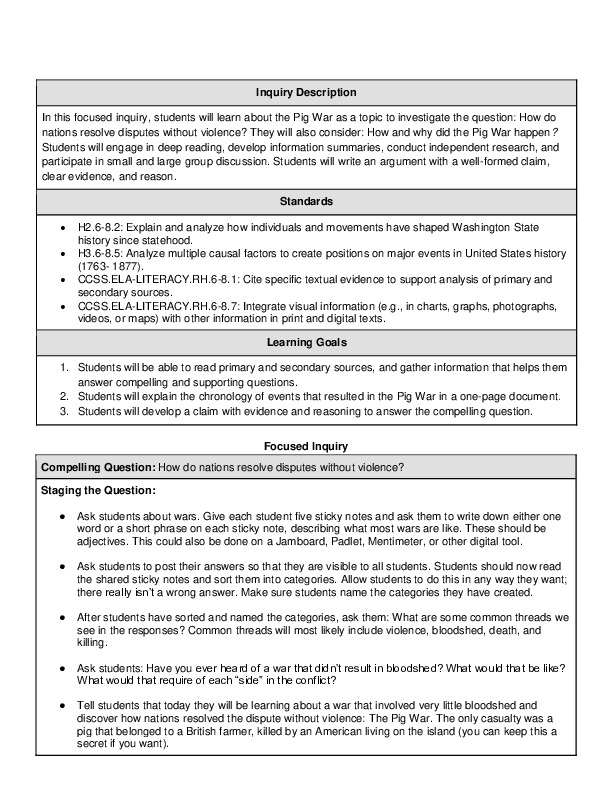