How did hate groups influence towns in Eastern Washington?

How did hate groups influence towns in Eastern Washington?

In this focused inquiry, students investigate the question: How did hate groups influence towns in Eastern Washington?

Students engage in a study of the KKK in Washington State in the 1920s. First, they will study a photograph of a KKK gathering in Colfax, Washington. Then, they will listen to a brief history of the KKK in Washington State to build background knowledge. Finally, in small groups or individually, students will choose a town from Eastern Washington to study: Yakima or Colfax/Pullman. After they collect their evidence, students will write a well-formed argument with a claim, evidence, and reason.

1. Students will be able to read primary and secondary sources and gather information that helps them answer compelling and supporting questions.

2. Using primary and secondary sources, students will compare and contrast accounts of a historical event.

3. Students will develop a claim with evidence and reasoning to answer the compelling question.


SSS1.6-8.1 Analyze positions and evidence supporting an issue or an event.

H1.6-8.4 Analyze a major historical event and how it is represented on timelines from different cultural perspectives, including those of indigenous people.

H2.6-8.2 Explain and analyze how individuals and movements have shaped Washington state history since statehood.

Compelling Question: How did hate groups influence towns in Eastern Washington in the early 20th Century?

Step 1: Ask students: When you think of the Ku Klux Klan, what images come to mind? What parts of the US do you think the KKK had the most influence over? Have students share their responses and then share the image, “Klan meeting in Colfax, WA around the 1920s.”

Step 2: Have students investigate the image and share out what they notice/wonder. Share the origin of the image and ask: What surprised you about the image? Could this hate group be present in other areas of Washington in the 1920s as well?

Step 3: Read the excerpt from HistoryLink (text follows this lesson) to build background knowledge about the KKK in Washington State. Alternatively or in addition, you can show the YouTube video, KKK: Then and Now | National Geographic

Supporting Question:  How did the KKK show its presence in small towns across Washington?

Formative Performance Task: Individually or in pairs, students will choose ONE location to study (Yakima or Seattle. Students will read the main text on each page and answer the questions provided. Students will also choose at least one primary source (newspaper) from each site, which are included in the right-hand column on each page. The purpose for reading the primary source is to affirm/confirm the details that were learned in the main text. Students will read all texts with the compelling question in mind and gather details about the Ku Klux Klan in each source.

Argument: Using details from the featured sources, craft an argument that answers the compelling question. Students should have a claim, evidence from sources and reasoning that provides an analysis of evidence connected to their claim.

Taking Informed Action: Students can research the history of hate groups in their own towns and create a ThingLink that communicates their discoveries (KKK presence, participation, resistance). The ThingLinks can be a virtual museum that can be shared with the community on the school’s web site. 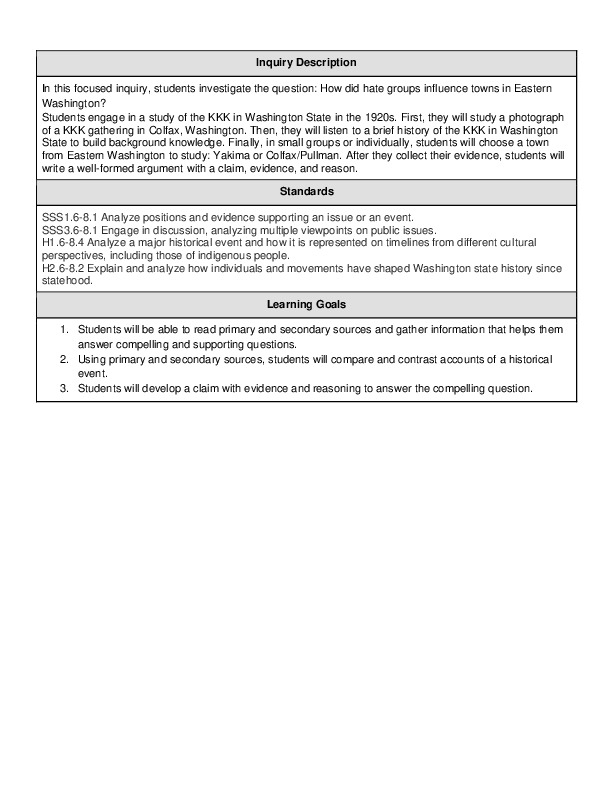 How did hate groups influence towns in Eastern Washington_.docx