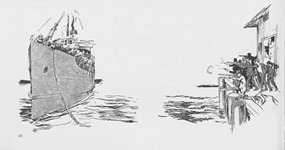 The Everett Massacre (also known as Everett's Bloody Sunday and the Battle of Everett) occurred on November 5, 1916. A group of Industrial Workers of the World (I.W.W.), commonly called "Wobblies", headed to Everett from Seattle on the steamships Verona and Calista to support a strike by local shingle weavers. Their arrival was preceded by strikes at area mills and the police-sanctioned harassment of I.W.W. members in Beverly Park, on October 30, 1916.

A group of citizens, deputized individuals (many of whom belonged to the Commercial Club), and law enforcement led by Snohomish County Sheriff Donald McRae, in support of local business interests, met them at the pier, refusing to let them disembark. They saw the arriving Wobblies as anarchists coming to create havoc in their town and disrupt business. The visiting I.W.W. members had advertised ahead of time for a meeting on labor and free speech. A shot rang out and a brief period of bedlam ensued.